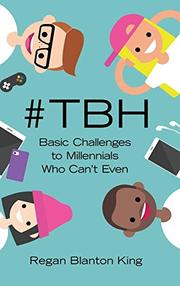 In this debut, a religious millennial offers a wakeup call to members of his demographic.

King, a pastor who was born in 1992 and raised in an American Baptist family, immediately stakes out his main theme in this brief, nonfiction debut. Millennials, he says, should not only seize opportunities and take more responsibility for their lives—they should also consider embracing Christianity as a way to help them do it. But although he has a serious purpose, he adopts a wry, jocular tone throughout this book. He opens by defining what a millennial is and warning that he won’t be offering a vague, “psycho-babble apologetic.” Instead, he says, he’ll be addressing some of the real problems and shortcomings of the “snowflakes” among members of his generation. He believes that millennials have been coddled by society, which he says has low expectations of them; this, in turn, has made millennials have low expectations for themselves. King goes on to deliver a fast-paced, engagingly written blend of frank assessments of millennial attitudes and specific calls to fellowship for millennial, fundamentalist Christians like himself. He offers a refutation of what he characterizes as millennials’ disdain for traditional rules and structure: “Rules do matter. Rules set a standard. Rules remind us of a right and a wrong way,” King writes. Other sections focus on checking what he sees as millennial influences on contemporary Christianity; for instance, he advocates firm structure and hierarchy in church services. He also addresses other alleged shortcomings of his generation—a lazy, derivative vocabulary; a proud ignorance of history; disdain for authority—in bracingly direct, and bracingly Christian terms. As a result, even some non-Christians may read this work for its moral clarity, while many Christians may nod their heads in agreement.