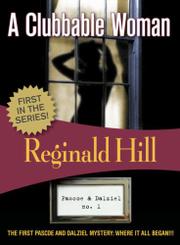 Only about half of Hill's police-procedurals (featuring Yorkshire cops Dalziel and Pascoe) have been published in America, Deadheads (p. 381) the most recent arrival; and this is the first US appearance for the 1970 Dalziel-Pascoe debut. The murder-victim of the title is shrewish housewife Mary Connon, found dead—an odd head wound—in front of her TV one evening. The obvious suspect? Her low-key husband "Connie," a former local rugby star who (to Mary's chagrin) has continued to spend his Saturdays at the nearby rugby club. But, despite anonymous accusations and bad-mouthing from a nasty neighbor, neither fat Dalziel nor the Connons' daughter Jenny believes that Connie is guilty. So all hands start sleuthing into possible sexual motives within the rugby-club—especially after Jenny finds heavy-breathing letters that her late mother received from a peeping tom. And the (rather strained) solution involves nearby adultery, Mary's nasty taste for emotional blackmail, and some ugly playfulness gone awry. Neither as dark nor as funny as later, better Hill, with Dalziel and Pascoe (still unmarried) not yet fully-drawn—but curious and atmospheric in its moody, rugby-centered, plodding way.