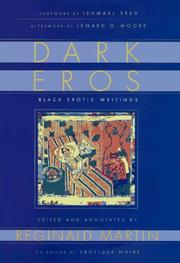 Stories, poems, and an essay exploring the complex nature of eroticism, mostly by little-known writers. Not surprisingly, given the length of the volume, there's a good deal of repetitive coupling here (pointing out one of the limitations of erotic writing—there really are only so many ways to say it), and some feeble and unoriginal symbolism, but there's also some poetry distinguished by its frankness and vigor, and several pieces, including Scott Jackson's ``Acid Black,'' that convincingly couple eroticism with the specifics of modern urban experience. Despite the title, there's little effort made here to define a particular black erotica, aside from a fascinating essay by Kalammu ya Salaam, titled ``Do Right Women: Black Women, Eroticism, and Classic Blues.''