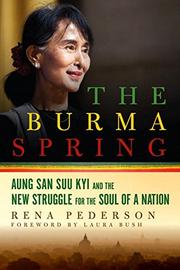 Aung San Suu Kyi and the New Struggle for the Soul of a Nation
by Rena Pederson
BUY NOW FROM
AMAZON
BARNES & NOBLE
LOCAL BOOKSELLER
GET WEEKLY BOOK RECOMMENDATIONS:

Dallas journalist Pederson (Writing/Southern Methodist Univ.; The Lost Apostle: Searching for the Truth About Junia, 2006, etc.) evokes the quiet, stubborn dignity of this rather improbable political icon of Myanmar, a multiethnic country of mostly Buddhists. The daughter of visionary war hero and founder Aung San, who had been brokering independence from Britain when he was assassinated by the Burmese military in 1947, Suu Kyi was largely drawn into politics by accident, more out of a sense of duty than personal political engagement. Pederson looks at the factors that led the martyr’s daughter, educated at Oxford University, married to British academic Michael Aris in 1971 and the mother of two sons, to return to her homeland after years away and take up the crusade for democracy. The 20-year military dictatorship of Gen. Ne Win had essentially ruined one of the most prosperous and literate nations in Southeast Asia, relegating it to the status of “basket case” by the spring of 1988, when Suu Kyi returned to care for her ailing mother just as student demonstrations began to erupt in response to economic oppression. Urged to take up the banner of democracy in the name of her father, she began to make her first speeches about the military crackdown, referring to her father’s assassination: “People have been saying I know nothing of Burmese politics. The trouble is, I know too much.” Harassment only fed her determination and popularity, and separation from her husband and sons did not deter her. Awarded the Nobel Peace Prize in 1991, Suu Kyi could not claim it until the end of her house arrest 20 years later, thanks to international pressure by Hillary Clinton and Madeleine Albright, among others.

Pederson visited her subject several times, and she draws a deeply nuanced portrait of the enigmatic, inspiring leader.

EVERYTHING IS BROKEN
by Emma Larkin
Nonfiction

THE LADY AND THE PEACOCK
by Peter Popham
Nonfiction

A DAUGHTER'S MEMOIR OF BURMA
by Wendy Law-Yone
Children

LAND OF A THOUSAND EYES
by Peter Olszewski
Newsletter sign-up