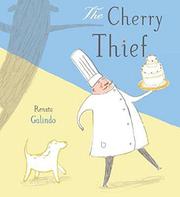 A master pâtissier is flummoxed when his signature cherries go missing from his pastries.

Chef Armand has named his patisserie “La Cerise,” indicating the importance of the fruit to his art. So when all of a sudden the cherries start disappearing, it’s an emergency. “At first he thought he had just forgotten. Then, he was sure he hadn’t! It was becoming embarrassing.” The chef’s dissatisfied customers complain in speech balloons that contain merely a cherry; their body language speaks for them. Children will note tiny blue footprints, which Chef Armand’s dog also notices and brings to his attention. Lying in wait for the cherry thief, Chef Armand surprises a little blue creature on whose porcupinelike quills the chef’s cherries have become stuck. Wielding his rolling pin with abandon, the chef chases the thief around the patisserie. The thief escapes, but from the destruction, a cherry tree magically springs from one of the smashed cherries—suddenly, there is enough for all. Children will enjoy the slapstick enormously, and the mysteries that remain—just what kind of creature is the cherry thief? How could the cherry tree possibly grow that fast?—will give them food for thought. Newcomer Galindo’s limited palette of pale yellow and gray allows the blue creature and type as well as the red cherries to pop.