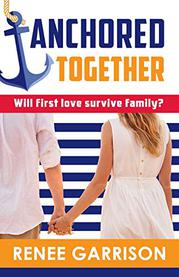 In Garrison’s YA sequel, a high school girl falls in love and deals with an alcoholic father.

This follow-up to The Anchor Clankers (2017) takes place in 1972, a year after 16-year-old Suzette LeBlanc moved from Massachusetts to Florida. Her father is the commandant of the Sanford Naval Academy, a private boarding school for boys, and the family lives in an apartment below the midshipmen’s dorm. The previous year, Suzette made friends with several “Anchor Clankers,” as naval students are called. She finds herself attracted to 18-year-old academy senior John Elliott, and they share something in common: Their fathers are both problem drinkers, and both teens understand what it’s like to walk on eggshells, never knowing what might set off a tirade or cause public embarrassment. As their romance heats up, Suzette and John find a sense of refuge in each other. They pledge to stay a couple when John goes off to college, but their love is threatened by his family’s disapproval and by the jealousy of John’s so-called friend Gary. Suzette must make some grown-up decisions about what’s best for the relationship while also realizing that she can’t be responsible for her dad’s actions. Garrison takes what could be a simple tale of first love and gives it depth by delving into the serious issue of alcoholism, particularly how it can cause disturbing personality changes in loved ones. In one scene, for example, Suzette’s father drunkenly insists on tickling her foot, gripping her ankle tight enough to hurt her; although the action isn’t floridly abusive, it understandably helps to cement her desire to leave home. Unusually but realistically, this isn’t a recovery narrative; by the end of the novel, Suzette hasn’t followed through on her intention to attend a group for children of alcoholic parents, for example. A few anachronisms detract from the 1972 setting, such as the existence of videotapes and a snarky reference to the “circle of life” from the 1994 film The Lion King.

A coming-of-age novel that offers a sensitive take on familial alcoholism.