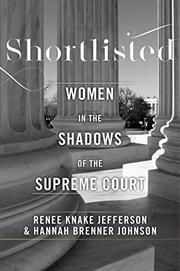 Women in the Shadows of the Supreme Court

Two law professors collaborate to tell the political and personal sagas of women publicly considered for appointment to the Supreme Court but never actually nominated by a president.

Before the 1981 confirmation of Sandra Day O’Connor as the first woman Supreme Court justice ever, it appeared that several presidents would remove the gender barrier. However, political partisanship as well as misogyny scuttled every potential nominee. Though three women have followed O’Connor—Ruth Bader Ginsburg (1993), Sonia Sotomayor (2009), and Elena Kagan (2010)—Jefferson and Johnson rightfully remind readers that this is far from satisfactory in terms of both equity and common sense. No woman received a license to practice law in the U.S. until 1869, and that same year, “Washington University in St. Louis became the first law school to admit women.” For a time, it appeared either Herbert Hoover or Franklin Roosevelt would nominate Florence Allen, “the first woman whose name appeared on official lists of possible candidates for appointment” to the nation’s highest court. Unsurprisingly, however, Hoover and Roosevelt opted for yet another white male. After those missed opportunities for Allen, only five women received public consideration before Ronald Reagan nominated O’Connor. In the first section of the book, Jefferson and Johnson focus on the political maneuvering behind the consideration of each candidate. In the second section, the authors examine the personal and professional attributes of the shortlisted women, hoping to identify relevant lessons about the “gendered consequences” of being publicly considered but not nominated. The lessons involve successfully battling tokenism; overcoming stereotypes about motherhood or, alternately, childlessness; being subjected to examinations of sexuality, including the character of romantic partners; dealing with discrimination regarding older women; and navigating objections that women justices decide judicial disputes differently from men, and perhaps inappropriately.

With fresh research, the authors effectively humanize the women who never received the nominations they deserved.