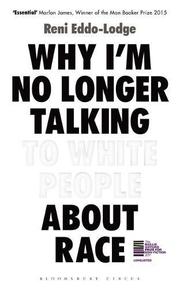 WHY I'M NO LONGER TALKING TO WHITE PEOPLE ABOUT RACE

A London-based journalist offers her perspective on race in Britain in the early 21st century.

In 2014, Eddo-Lodge published a blog post that proclaimed she was “no longer engaging with white people on the topic of race.” After its viral reception, she realized that her mission should be to do the opposite, so she actively began articulating, rather than suppressing, her feelings about racism. In the first chapter, the author traces her awakening to the reality of a brutal British colonial history and the ways that history continues to impact race relations in the present, especially between blacks and the police. Eddo-Lodge analyzes the system that has worked against blacks and kept them subjugated to laws that work against—rather than for—them. She argues that it is not enough to deconstruct racist structures. White people must also actively see race itself by constantly asking “who benefits from their race and who is disproportionately impacted by negative stereotypes.” They must also understand the extent of the privileges granted them because of their race and work through racist fears that, as British arch-conservative Enoch Powell once said, “the black man will [one day] have the whip hand over the white man.” Eddo-Lodge then explores the fraught question of being a black—and therefore, according to racist stereotype—“angry” female and the ways her “assertiveness, passion and excitement” have been used against her. In examining the relationship between race and class, the author further notes the way British politicians have used the term “white” to qualify working class. By leaving out reference to other members of that class, they “compound the currency-like power of whiteness.” In her probing and personal narrative, Eddo-Lodge offers fresh insight into the way all racism is ultimately a “white problem” that must be addressed by commitment to action, no matter how small. As she writes, in the end, “there's no justice, there's just us.”

A sharp, compelling, and impassioned book.