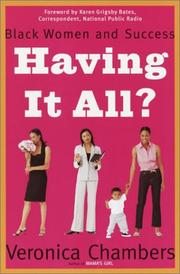 An absorbing look at the Clair Huxtables of the world.

These African-American women have benefited from both the civil rights and feminist movements, going in one generation “from the kitchen to the boardroom.” They summer on the Vineyard and in Sag Harbor, shop in Paris, frequent Broadway plays, and attend gallery openings. Among those profiled are Thelma Golden, deputy director of the Studio Museum in Harlem; Lynette Hall, director of on-air promotions for ABC turned stay-at-home-mom; and Crystal Ashby, antitrust lawyer for a major oil company. As journalist Chambers (Mama’s Girl, 1996, etc.) ponders the extraordinary gains made by black women, she also underscores the issues unique to this group. While many of her subjects experience both gender and cultural isolation within the workplace, they are also isolated within their own families, often being the first to go to college, the first to attend graduate school, the first to own a second home. It may be difficult for them to find a partner equal in income and class, yet unlike their white counterparts, they are urged to look toward blue-collar men as potential mates. But as one woman put it, “How will we meet [the construction worker]? If we’re in a certain demographic then shouldn’t we be meeting men who are in that demographic?” All in all, though, these women aren’t waiting for Prince Charming. If single, they are involved in their careers, volunteer work, and hobbies. In one section revealing the legacy of both political movements, the author interviews two women who came of age during the Black Power movement and their adult daughters, who were children during the feminist movement. The mothers identify themselves first as blacks and second as women; for their daughters, the reverse is true.

A fine appraisal of the women in the growing African-American middle and upper classes.

FOR COLORED GIRLS WHO HAVE CONSIDERED POLITICS
by Donna Brazile
Nonfiction

THE MEANING OF MICHELLE
by Veronica Chambers
Nonfiction

EVERYBODY'S GOT SOMETHING
by Robin Roberts
Fiction

WHEN DID YOU STOP LOVING ME?
by Veronica Chambers

IT AIN'T OVER...TILL IT'S OVER
by Marlo Thomas
Newsletter sign-up