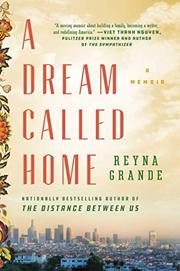 An award-winning author’s account of how she became the first person in her family to attend college and live the dream of becoming a writer.

When Grande (The Distance Between Us, 2012, etc.), a former undocumented Mexican immigrant, left Los Angeles in 1996 for the University of California, Santa Cruz, she was both excited and afraid. Two older siblings had dropped out of college, broken her alcoholic father’s heart, and made him “[give] up on me.” He had also exiled them from his life to facilitate the return of the second wife he had divorced. By the time Grande left community college for UCSC, her main sources of emotional support were a professor and a boyfriend who had been accepted to another college. At first, the author felt out of place on the nearly all-white UCSC campus; gradually, she found a place among other Hispanic students and in the university’s creative writing program. But the ghosts of her past continued to haunt her. When, for example, the mother who had abandoned her sent Grande’s sister back to Mexico for “running wild,” Grande brought the young girl to Santa Cruz only to be profoundly disappointed by her sister's bad behavior. After graduation, she returned to LA idealistic, believing that a degree would automatically grant her success. Instead, she floundered, unsure of how to begin her writing career. Then she stumbled into a teaching job. She began to make her dream of a middle-class life a reality, but at the expense of her writing. Now a single mother but no less determined to succeed on her terms, she earned a place in the Emerging Writers program, where she finally found the creative path she had been seeking all along. Candid and emotionally complex, Grande’s book celebrates one woman’s tenacity in the face of hardship and heartbreak while offering hope to other immigrants as they “fight to remain” and make their voices heard in a changing America.

A heartfelt, inspiring, and relevant memoir.