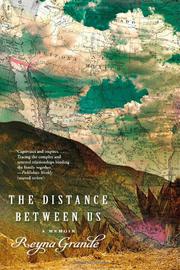 THE DISTANCE BETWEEN US

In her first nonfiction book, novelist Grande (Dancing with Butterflies, 2009, etc.) delves into her family’s cycle of separation and reunification.

Raised in poverty so severe that spaghetti reminded her of the tapeworms endemic to children in her Mexican hometown, the author is her family’s only college graduate and writer, whose honors include an American Book Award and International Latino Book Award. Though she was too young to remember her father when he entered the United States illegally seeking money to improve life for his family, she idolized him from afar. However, she also blamed him for taking away her mother after he sent for her when the author was not yet 5 years old. Though she emulated her sister, she ultimately answered to herself, and both siblings constantly sought affirmation of their parents’ love, whether they were present or not. When one caused disappointment, the siblings focused their hopes on the other. These contradictions prove to be the narrator’s hallmarks, as she consistently displays a fierce willingness to ask tough questions, accept startling answers, and candidly render emotional and physical violence. Even as a girl, Grande understood the redemptive power of language to define—in the U.S., her name’s literal translation, “big queen,” led to ridicule from other children—and to complicate. In spelling class, when a teacher used the sentence “my mamá loves me” (mi mamá me ama), Grande decided to “rearrange the words so that they formed a question: ¿Me ama mi mamá? Does my mama love me?”