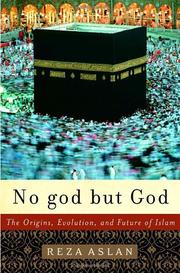 NO GOD BUT GOD

The Origins, Evolution, and Future of Islam

A lively and accessible introduction to Islam.

If it accomplished nothing else, Aslan’s first book would be worthwhile for its clear expositions of the basics of Islamic history and Muslim thought. Aslan, a professor (Islamic and Middle Eastern Studies/Univ. of Iowa) and New York Times Middle East consultant, walks through the life of the Prophet, the redaction of the Qur’an, and the Five Pillars that are fundamental to Muslim life and practice. But these helpful expositions are just the starting point for making two arguments. First, Samuel Huntington’s Clash of Civilizations—the theory most pundits have gravitated toward since 9/11—is an inadequate description of the current world scene. What we really have, Aslan says, is a clash of monotheisms, competing particularistic, and often exclusive, claims about the nature of God, revelation, and prophecy. Second, there is real possibility for democracy in the Middle East. Aslan paints the Prophet’s teachings in a compelling light: not unlike Jesus (Aslan does make explicit comparisons between Islam, Judaism, and Christianity), Aslan’s Muhammad was fiercely concerned with the rights of the oppressed and marginalized; but many Muslim scholars who came after Muhammad were just as fiercely concerned to evade the egalitarian implications of the Prophet’s teaching. (Muhammad emerges here almost as a proto-feminist. It’s the centuries of men who came after him who seem bent on backlash.) Aslan argues that Islam can—indeed must—“be used to establish a genuinely liberal democracy in the Middle East.” But the democracy he envisions is not a colonial democracy, imported from Europe or America. It is an indigenous democracy, with a distinctly Islamic flavor. Readers will gravitate toward No God But God not only because of its stimulating arguments, but also because it’s so well put together as a literary work. Aslan isn’t just a mere scholar and reporter; he also attended the Iowa Writers’ Workshop, and it shows.

An introduction to Islam as evocative as it is provocative.