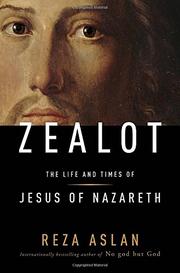 The Life and Times of Jesus of Nazareth

A well-researched, readable biography of Jesus of Nazareth.

Jesus of Nazareth is not the same as Jesus Christ. The Gospels are not historical documents, nor even eyewitness accounts of Jesus’ life. In fact, most of the incidents in them are pure fiction. Aslan (How to Win a Cosmic War: God, Globalization and the End of the War on Terror, 2009, etc.) has made the study of religion his life’s work, and it shows. After explaining the origins and evolution of Islam, the author now turns to Christianity and its unlikely beginnings. The Gospels weren’t written during Jesus’ lifetime, but rather between A.D. 70 and 120, and they certainly weren’t written by the men whose names are attached to them. In fact, every word written about Jesus was written by people who never knew him in life—even though Paul claimed to know Jesus intimately, not as man, but as God. Jesus neither fit the paradigms nor fulfilled scriptural prophecies to meet the requirements of being a messiah. As he described himself, the historic “Jesus…was a Jew, and nothing more.” He was concerned only with Israel and his fellow Jews. For readers who believe that the Bible is the true word of God and its meaning must be taken literally, Aslan’s book will awaken doubt. The ancients did not see a difference between myth and reality, and eyewitness history did not exist; it was all propaganda. The authors of the Gospels were writing for the express purpose of explaining that Jesus wasn’t just another professional wonder worker; one thing set him apart.

Why has Christianity taken hold and flourished? This book will give you the answers in the simplest, most straightforward, comprehensible manner.