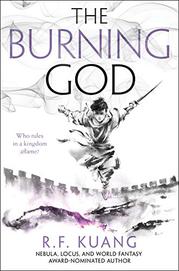 In the final installment of the Poppy War trilogy, a warrior shaman resolves to seize control of her homeland from enemies far and near, no matter the cost.

Having suffered severe losses and betrayals, Rin rallies the Southern Coalition in an effort to defeat the Mugenese troops still in Nikan, the president of the Nikara Republic, and the foreign menace of the Hesperians, with their almost unimaginably advanced technology. But a southern army is not enough, and Rin must also rely on the unpredictable powers of her wild god, the Phoenix, and form a risky alliance with the Trifecta that once ruled Nikan. Drawing heavily on 20th-century Chinese history, Kuang continues to explore familiar themes—including imperialism, racism, colorism, and the terrible and long-lasting effects of war—while deepening Rin’s portrayal, as Rin experiences moments of heartfelt sympathy and connection with others while also continually seeking power and succumbing over and over to her own hubris and paranoia. This installment dwells heavily on the devastating realities of war and the costs of leading a nation in crisis but does not sink into overly grotesque meditations—or perhaps we, along with Rin, have become desensitized and hardened. Ultimately, despite the epic scope of the plot, the novel hinges on the relationships between Rin and those closest to her: A nation may rise or fall and thousands may lose their homes or starve in the process, but their fate depends not on magic from the divine plane but on simple, fallible people.

A dark and devastating conclusion that transcends its roots in historical fact to examine brutal truths.