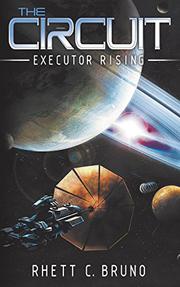 In this first installment of a new sci-fi saga, a brilliant inventor/statesman secretly plots against his own totalitarian regime with the assistance of an advanced robot.
In Bruno’s (Isinda: Curse of the Sleeping Dragon, 2013, etc.) vigorous, often violent narrative of interplanetary intrigue, Earth has been reduced to an uninhabitable cinder by mankind’s rapacious mining of the resource Gravitum, which enables deep-space travel. Humanity has therefore spread throughout the solar system, particularly to asteroids and gas-giant moons, using hyperspeed travel provided by a series of conduit-stations called “the Kepler Circuit.” Most of these spaceways and colonies have been taken over by the New Earth Tribune, an authoritarian empire which exerts its will using a religion focused on worshipping the tortured Homeworld. Cassius Vale is a war hero and scientist who’s prominent due to his authorship of the Tribune’s security precautions, but he’s never forgiven the Tribune for its offenses against him, particularly the loss of his son. Secretly and illegally, he’s constructed an advanced artificial intelligence robot called ADIM (Automated Dynamic Intelligence Mech), an appearance-shifting droid of frightening destructive prowess and ruthless logic who also serves as Vale’s surrogate offspring. The engaging narrative follows not only Cassius and ADIM, but also Sage Volus, a bionic beauty and zealous Tribune agent who’s also, as it happens, a valued piece in Cassius’ anti-Tribune conspiracy. ADIM seems to be a bit of a riff on the killer cyborgs of the Terminator films (though without the time-travel gimmick), and the story walks a line between vintage pulp and more hard-edged, combat-oriented sci-fi. But as a series launch pad, its plotline is lean and satisfying. That said, there do seem to be some gaps in the future-history mythology that are more frustrating than thought-provoking, especially regarding the 500-year-old Kepler Circuit, its origin and function. One assumes that Bruno will provide these details in forthcoming installments. As it is, this kickoff ends with lots of dangling subplots—not to mention a few equally errant limbs.
A hard-charging opener to a promising, if bloody, space-opera series.