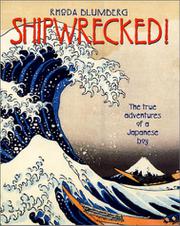 The True Adventures of a Japanese Boy

The life of Manjiro Nakahama, also known as John Mung, makes an amazing story: shipwrecked as a young fisherman for months on a remote island, rescued by an American whaler, he became the first Japanese resident of the US. Then, after further adventures at sea and in the California gold fields, he returned to Japan where his first-hand knowledge of America and its people earned him a central role in the modernization of his country after its centuries of peaceful isolation had ended. Expanding a passage from her Commodore Perry in the Land of the Shogun (1985, Newbery Honor), Blumberg not only delivers an absorbing tale of severe hardships and startling accomplishments, but also takes side excursions to give readers vivid pictures of life in mid-19th-century Japan, aboard a whaler, and amidst the California Gold Rush. The illustrations, a generous mix of contemporary photos and prints with Manjiro’s own simple, expressive drawings interspersed, are at least as revealing. Seeing a photo of Commodore Perry side by side with a Japanese artist’s painted portrait, or strange renditions of a New England town and a steam train, based solely on Manjiro’s verbal descriptions, not only captures the unique flavor of Japanese art, but points up just how high were the self-imposed barriers that separated Japan from the rest of the world. Once again, Blumberg shows her ability to combine high adventure with vivid historical detail to open a window onto the past. (source note) (Biography. 10-13)