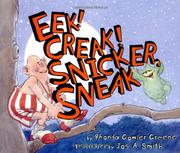 by Rhonda Gowler Greene & illustrated by Jos. A. Smith

When all the town is fast asleep, two creatures crawl and creep, making eerie sounds and playing scary tricks on children. The grownups try to explain away the children’s fears as they cry and complain, but of course they can’t see the menacing shadows of the two tricksters—one tall, one small. Told in rhyme with the sounds printed in big, bold letters, the action is played out in full double-page spreads that colorfully depict Bugbear, a giant-like being wearing red striped shorts, and Bugaboo, a potbellied, green, furry animal. Notes from the author and illustrator (on the verso of the title page) explain that the names in folklore mean “hobgoblins” and describe the fun the illustrator had in creating the creatures. Kids will delight in the satisfying switch when the children gather up their courage and turn the tables on the two by yelling “BOO” and chasing them away. The playful exaggeration in the illustrations of the two wide-eyed children and the two wild and wiley tricksters sets up the twist neatly and the type style in BlockheadUnplugged contributes to the spookiness of the sound effects. On repeated reads, kids will eagerly join in with the word sounds as they anticipate the child-size victory. (Picture Book. 4-7)