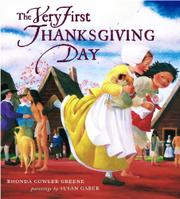 Not really a cumulative verse and not quite a circular tale the rhythm of this story brings to mind “This is the House that Jack Built.” Greene and Graber collaborated earlier on The Stable Where Jesus Was Born (not reviewed), which had a similar lyrical pattern. Greene tells her tale from the very first Thanksgiving Day, through the interaction with the Indians, the settling of the village, and to the Mayflower, and across the ocean and back again to that first gathering. Though the author cites specific resources, the illustrator does not; she does, however, speak of the interesting things that she learned while researching the pictures. Authenticity concerns will cause readers to question whether nine Pilgrims (dressed in spotless clothing, white aprons, collars, and such) would have gathered around a squatting “Indian” as he planted three fish around a hill of corn. And while it is picturesque to have a young girl hand him the kernel of corn, would she have done so while holding a doll? Although well executed and in a colorful palette, these illustrations seem to miss their mark. No contemporary historic records to a rock in the harbor have been found, so one must also wonder if a verse that refers twice to the harbor being marked by a huge stone doesn’t perpetuate a romantic interpretation of this event in other ways as well. There are plenty of offerings that perpetuate the myth of this day; libraries don’t need another. (Poetry. 5-9)