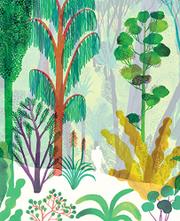 Bozzi, an Italian journalist and poet, envisions a forest journey as a metaphor for the stages of life.

The book’s design is clever, instantly arousing curiosity with its translucent jacket (sans title) overlaying brilliantly hued vegetation onto a muted cover. The first double-page spread is all white, containing a straightforward sentence on the verso and a debossed face with die-cut eyes through which color is visible on the recto. A pattern is established. The white pages depict, by embossing or debossing only, a sequence of humans of varying races who gradually age. These file between spreads of greenery that similarly transform from a small grove to a progressively more crowded forest, then barren woodland. As youths, the explorers study insects and invent games. Later they notice fellow travelers, whose diversity is mentioned in terms of height, shade, and temperament, with potential for rivalry or love. Some leave traces (art carved in stone), but ultimately, “there is a ravine into which each explorer will eventually fall, despite the precautions taken and the advancements of science.” The final etched face gradually fades as saplings rise through its cracks. Death is unequivocally a mystery. Some will appreciate the final blank pages for contemplation. For others of any age, confronting one’s own mortality in a context in which life seems neither meaningful nor to be remembered will be disquieting.

Students of design will appreciate the construction and the lush, vibrant compositions; those seeking comfort for end-of-life matters will want to look elsewhere.