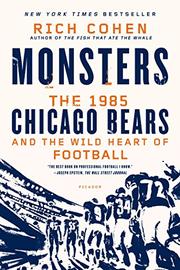 The 1985 Chicago Bears and the Wild Heart of Football

A fan’s engaging yet ultimately melancholy love letter to his beloved team and his hometown.

“Pick your team carefully, because your team is your destiny.” Vanity Fair and Rolling Stone contributor Cohen’s father’s solemn advice can be easily understood by sports fans. However, other readers will enjoy this entertaining, if profane, history of the 1985 NFL champion Chicago Bears. That team symbolized Chicago through their fierceness and audacity and by playing a “blitzkrieg” style of football that would certainly be banned today. Throughout, the author provides comical anecdotes about head coach Mike Ditka, a pugnacious tantrum-thrower whose method was “Ready, Fire, Aim.” Ditka’s orneriness mirrored that of “stingy, angry and mean” team owner George “Papa Bear” Halas (a founder of the NFL) and met its match in the defiant quarterback Jim McMahon, who, despite being undersized with a weak throwing arm and a bad eye, played without regard for his body and led his team to a 15-1 record. Cohen’s telling of the Bears’ founding and its tradition of nastiness is by turns devastating, regarding the irreparable harm done to players’ bodies and minds, and moving, as when he explains that Hall of Fame running back Walter Payton was “Chicago as Chicago wanted to be: a fighter…who’s been knocked down but always gets back up.” Cohen thankfully avoids sentimentality and doesn’t bog readers down in lengthy game reports or analyses. The author is at his best in the interviews with 32 retired players and executives who offer their impressions of the Bears’ famed “46” defense, “the most devastating force in football,” and its characters, including the Hit Man, Mongo, the Black & Blues Brothers and, most famously, the Fridge.

Ideal for Chicagoans, both casual and die-hard sports fans, and anyone who wonders, “What happens when you have a dream and that dream comes true?”