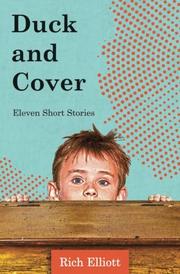 A set of stories about kids in a seemingly wholesome small town that’s tinged with darkness.

Elliott’s (Runners on Running, 2012, etc.) characters are young boys and a few girls, most of whom are growing up in the town of Milford, Illinois, during the 1950s and ’60s. Their lives are filled with schoolwork, sports, and crushes until subtle crises undermine their complacency. In “The Faulkner Sentence,” for example, a beloved English teacher revels in diagramming sentences until a student challenges her to parse a 1,300-word William Faulkner passage. A boy trudges through a snowstorm toward the hospital where his mother lies dying of cancer in “The Big Snow,” and a high school track star, in “Running God,” gets ground down by his coach’s sadistic training regimen. In “The White Sox Team Card,” a trio of delinquents plots to steal a precious baseball card that a Chicago gangster covets, and in “Lucky,” a boy discovers that his perennial good fortune comes at the expense of his polio-stricken sister—and he tries to compensate by courting disaster. A young girl marvels at the northern lights and dreads her strange, drunken uncle in “Aurora Borealis”; a boy reacts to the Sputnik 1 launch in “Propellants” by building an amateur rocket called Red Scare; and in the title story, an eighth-grader discovers a classmate taking refuge in his family’s fallout shelter during the Cuban missile crisis. In this debut collection of stories, some of which have previously appeared in literary magazines, Elliott crafts characters who are mainly ordinary youngsters in ordinary circumstances who feel slightly uneasy in their skins—overmatched by expectations or possessing unrealistic desires. Often, these tensions are played for gentle comedy, but just as often, the author pulls the rug out from under readers by swerving into disaster. Elliott writes with a supple, naturalistic style that’s also psychologically rich: “George—beautiful, vulnerable George—with lifetimes behind those lovely, hooded eyes and smiling his all-knowing smile,” muses a girl besotted with Beatles heartthrob George Harrison in “Mania.” The result is a vivid evocation of postwar America that’s both halcyon and haunted.

A sometimes-luminous, sometimes-mordant collection that undercuts its nostalgia with complex ironies.