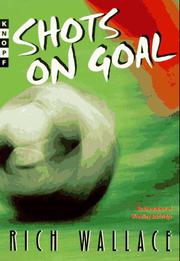 Wallace flattens the sophomore jinx in this taut, present-tense tale of an underdog high-school soccer team battling internal dissension, set in the same Pennsylvania town as his strong debut, Wrestling Sturbridge (1996). Friends and soccer nuts since grade school, Barry and Joey bring new life to a team that was 2-11-1 last year, but their relationship is undergoing a power shift. Joey's need to dominate is getting on Barry's nerves, on the field—where his reluctance to pass the ball is costing games—and off: He cuts in on Barry's pursuit of Shannon, a luscious schoolmate. The more the buddies drift apart, though, the harder Joey plays, and through a series of exciting games he takes the team to a climactic try at the local league championship. Meanwhile, Barry arranges to be alone with Shannon at a party, and Joey retaliates by getting him fired from the inn where they both work. The friends' rift is healed by an exchange of knuckles and twin attacks of common sense. Wallace's teenage characters—all involved in athletics—are drawn from life and mostly likable; adults stay in the background, but Barry enjoys an unusually close relationship with his savvy college-age brother, Tommy, a font of good advice. Thanks in part to occasional descriptive asides, Sturbridge takes on a distinctive character, too: It's a small, ethnically diverse, sports-focused town, limited in its opportunities but not as confining as it seemed in the previous book. Engrossing fare. (Fiction. 11-13)