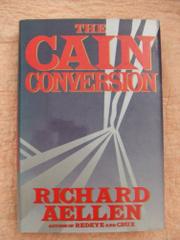 Aellen, an always trend-conscious suspense-writer (Flash Point, 1991, etc.), outdoes himself here with a cleverly au courant—and engrossing—thriller that mixes three timely suspense themes: multiple-personality disorder (cf. William Diehl's Primal Fear and James Patterson's Along Came a Spider), deep-cover Soviet agents left out in the cold (cf. Bob Reiss's The Last Spy), and child abuse. The brunt of all this misery is Secret Service agent Bob Sullivan, whose world shatters when he gets a phone call saying, ``I see the president and he's been bad.'' In a trance, Bob walks into the Oval Office and levels his gun at the President. The agent comes to before shooting, but the damage is done and, soon after, Bob is suspended. In intercut scenes set mostly in Moscow, we learn the truth behind Bob's troubles. Born in Russia as Mischa Amenov, he was subjected to an experiment that split him into three: Mischa; Cain, a homicidal maniac; and Bob, an all-American created by raising the boy in a replica of a small Kansas town. Mischa/Cain/Bob was then inserted into the US as a time bomb to kill the President by releasing Cain when the trigger-words are spoken. Bob knows none of this, but he begins to catch on when he visits his ``real'' Kansas hometown and no one recognizes him. Another clue takes him to Russia, where he learns that his stepfather, avenging Bob's unfaithful mother, is trying to trigger Cain. Meanwhile, the panicky Soviets have sent an assassin after Bob, but the stepfather kills that killer and then kidnaps Bob's two children to force Cain's hand. The kids manage to signal their location to Bob, though, leading to the blood-and-fire-filled climax. Too complicated, but strong characters and fresh, smart—and fashionable—action make this Aellen's best since his debut, Red Eye (1988).