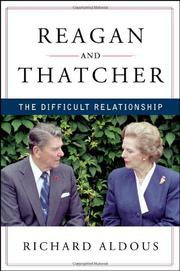 A historian charts the ups, downs, and in-betweens of a transatlantic partnership that defined an era.

The just-released biopic starring Meryl Streep is likely to spark renewed interest in the whip-smart, hectoring and humorless Margaret Thatcher, Britain’s first woman prime minister. No small part of her legacy was the relationship with her philosophical, transatlantic counterpart, the big-picture, affable Ronald Reagan. Partners in helping to end the Cold War, Reagan and Thatcher were always careful publicly to paper over differences, to appear united, to demonstrate that the “Special Relationship” between Britain and America remained unshakeable. But during the eight years their tenures overlapped, there were frequent, occasionally sharp differences between these two different personalities who seemingly shared only two traits: deep conservative conviction and an absolute devotion to their nation’s interest as they understood it. Although Reagan’s senior in service on the world stage, Thatcher was acutely conscious of her country’s inferior power position. Accordingly, she set out early to court the American president. Relying for color on declassified documents, interviews, oral histories and the published accounts of many observers, Aldous (British History and Literature/Bard Col.; The Lion and the Unicorn: Gladstone vs. Disraeli, 2007, etc.) revisits the two tangling over supplying technology for Soviet construction of the Siberian gas pipeline, over arms sales and control and over nuclear weapons and Reagan’s Strategic Defense Initiative. Reagan disappointed Thatcher by his less-than-full-throated support for her Falklands war; she responded with lukewarm enthusiasm for his Grenada invasion. They disagreed over policy in Lebanon and Libya, and they clashed over how best to deal with Gorbachev. Throughout, Aldous carefully and persuasively demonstrates the elaborate care each took to “handle” the other, precautions unnecessary had the relationship been as close as publicly portrayed. A revealing look at the political marriage of two titans, who, like Roosevelt and Churchill, will be forever linked in history.