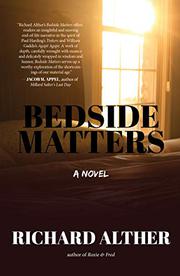 A dying millionaire reads the Persian poet Rumi on his deathbed in this novel.

Walter is a successful businessman who has earned money above and beyond even the wildest dreams of his youth, when he was nothing more than a scrappy kid raised in foster care. But Walter is dying. He’s laid up in bed, knowing that his muscles have already started to fail him and will soon quit entirely. There is no cure. His family visits: his ex-wife, Polly, who chose to end their marriage; his grown daughter, Paula, who has inherited his business acumen; his estranged son, Gavin, who has been in and out of rehab during his adulthood. But it is only when Paula leaves Walter a book of Rumi’s poetry that his perspective on life (and his impending death) starts to shift. He begins to fully understand how he built his life around his work—becoming a slave to his job—and that before he dies, he can make new choices. In his fifth novel, Alther impressively tackles what many writers call “the bathtub story” because the protagonist can only sit and think—in a bathtub or, in Walter’s case, a bed. Working within these deliberate constraints, the story shines the most through moments of humor that break the initial melancholy and acerbic tone. For instance, Irma, Walter’s nurse, brings in a high school a cappella group to serenade her patient, and it’s a humorous moment because it’s so unexpected. The situation is doubly amusing because Walter doesn’t know that “these talented young people contribute to Elderly Services that gets funded by United Way” and that he is “their Platinum Placard donor.” The author clearly intends this book to be a meditative novel, one that is driven by Walter’s character traits and interactions with Rumi’s poetry rather than a flashy plot. And yet the tale moves slowly, often frustratingly so. Perhaps some of this annoyance stems from the fact that Walter’s journey can feel as if it has an expected outcome, and it’s not clear whether there will be a payoff. While there is indeed a striking conclusion, it’s still hard to engage with Walter, especially when readers can guess his character arc fairly early on.

An introspective tale that offers a beautiful ending but few surprises.