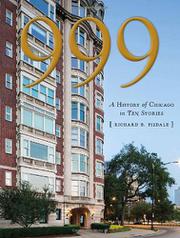 A History of Chicago in Ten Stories

by Richard B. Fizdale

This unique history centers on the prehistory, founding and residents of 999 Lake Shore Dr., an apartment building that symbolizes Chicago’s wealthy class.

Fizdale’s beautifully illustrated debut is a labor of love about his home, the architectural marvel 999 Lake Shore Dr. in the historic Chicago neighborhood of Streeterville. After catastrophic losses in the wake of the famous Chicago Fire of 1871, entrepreneurs and real estate watchers set their sights on the north side of the city, looking to build Lake Shore Drive, now a major thoroughfare on Chicago’s lakeside. Fizdale portrays the characters in those subsequent years: Potter Palmer, a visionary innovator of the department store, and George “Cap” Streeter, who schemed to create a land claim in Lake Michigan by allowing others to dump tons of garbage around his wrecked boat. Fizdale’s treatment of Streeter’s comic drama paints him larger than life, detailing his absurd machinations for stealing back “his” land, including the construction of a rudimentary tank out of a car, a small house and Gatling guns. Buoyed by the high quality of Fizdale’s research, Streeter’s story entertains immensely; at times, the book feels like the outline for a cable series, twisting and turning through Chicago real estate lore. Later, Fizdale’s vignettes of the many families that occupied 999 reveal a variety of human experience among wealthy Chicagoans. Each passage is a glimpse into a life among many, whether it’s someone who helped figure out how to remove sulfur from crude oil, a Rockefeller descendant who contacted her “spiritual bridegroom” via séance, or a tenant’s great-grandfather who died after gunpowder experiments went bad. Actors, socialites, gangsters, entrepreneurs and clerks all stayed there. Throughout, Fizdale’s humorous tone adeptly guides readers: “John [Kraft] processed, packaged and sold cheese. Then he did it again and again and again….Even wife June got into the act. She was a ‘cheese industry librarian.’ ” As Fizdale states in his introduction, “history never yields all of its secrets”; yet here we have a reconstruction that, though small in scope, uncovers the secret texture of life in another age. Numerous illustrations, maps, and black-and-white and color photos—taking up about as much space as the text—help enliven the work further.

Despite its specificity, this history is a small wonder, providing a fun but thorough look into one of Chicago’s greatest living spaces.