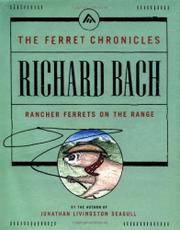 RANCHER FERRETS ON THE RANGE

Fourth in the Ferrets Chronicles, following Writer Ferrets: Chasing the Muse (p. 1154), which headed the ferrets for the bestseller list. In their Montana childhood and youth, these two rode together, ranchpaw Montgomery Ferret and blue-hatted, silver-furred Cheyenne Jasmine Ferret, when he taught her to ride a delphin and jump fences. “Look at those two,” says Monty’s brother Zander. “Different as rock and water, alike as birds on a branch!” Monty’s is a world outdoors, while she’s a film buff. Eventually, she goes off to Hollywood, breaks into flicks in Heshsty Ferret’s The Lady Speaks. Back at Little Paw, Monty learns the language of delphins, wins races riding Boffin, his delphin. He meets the forthright philosopher ferret Kinnie, who can appear or vanish in a puff and whose earthy wisdom makes Monty spiritually “Strong enough to meet my needs.” He opens a Western riding and racing school while asking questions of his higher self, then makes bestselling books on tape of his wisdom, later selling his famous rainbow fleece and averting tragedy to the flock. Cheyenne, meanwhile, does action scenes in megafilms. Their romance blooms with a bittersweet tang. Then Monty returns to Little Paw while Cheyenne goes for a shoot in Venezuela. Her performances sweep the Boxxes Film Festival and the College of Actors Awards, and the lovers meet at the premiere of Monty’s Rainbow sheep in the Canyon Performance.

But can there ever be a final matching up between two such disparate creatures? Only the moonlight knows.