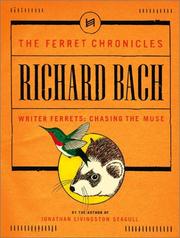 While the earlier installments were inspirational fables with ferrets as humans, neither was as focused as Jonathan Livingston Seagull, Bach’s 1972 bestseller. This time out, the plot will attract more adult readers, largely thanks to Bach’s revelations about the publishing game. In the beginning, Antonius Ferret tells us, all ferrets were given individual gifts—and one ferret was given the power to show visions, once he learned to write from the heart and touch the souls of kits as yet unborn. Handsome, golden-furred Budgeron Ferret works on a literary epic in his attic with a white silk scarf about his neck. His black mask forms a crisp W around his eyes—for Writer? With violet ink and a goose-feather quill, he begins Where Ferrets Walk, a swashbuckler featuring Count Urbain de Rothskit, that still has him in writer’s block on paragraph one. Even so, he’s published some genre short stories and a slow-selling novel—all typed. But his best work gets death notices. Meanwhile, his new bride Danielle, a pawicurist who hears all sorts of stories at work, decides to write and finds herself raptly fashioning the adventures of Veronique, the naughty but insouciant vixen. Then Budgeron sells a quickie, Bevo the Hummingbird, makes a killing that allows them to move to Colorado and buy a ranch. After six rejections, Danielle’s Miss Mischief sells to Ferret House Press, Budgeron’s publisher. Despair for Budg until Danielle suggests using the dragon as his bodyguard and muse, telling him, “Have fun. Don’t think. Don’t care.” He bats out Bevo and the Bee Bandits in a week. Big stars, they go on a book tour, and then inspiration hits: he’ll write Bevo Meets the Count. And snippets of Bachian wisdom rain down.

Pale Fire for preteens and teens.