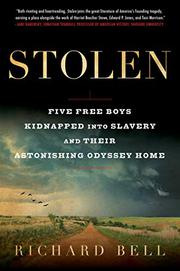 A historian tells the harrowing story of five free black boys kidnapped in Philadelphia by a brutal gang who hoped to sell them into slavery.

After the United States outlawed the importing of slaves in 1808, black residents of free states like Pennsylvania lived in dread of kidnappers who hoped to sell them in the labor-deprived South. Bell (Early American History/Univ. of Maryland; We Shall Be No More: Suicide and Self-Government in the Newly United States, 2012) brings their terrors to life as he reconstructs this little-known episode in American history. The author focuses on five boys lured onto a ship on the Philadelphia waterfront in 1825 by a criminal gang led by Joseph Johnson, whose accomplices included his brother and sister-in-law, Ebenezer and Sally Johnson. Newlyweds Ebenezer and Sally took the boys on a horrific journey by foot and wagon toward the slave market in Natchez, Mississippi, that soon went awry. Ebenezer sold one boy in Tuscaloosa, Alabama, when cash ran low and beat another so savagely he died on the trip. The three remaining boys, desperate but alert, caught a break when one ran away and told his story to a sympathetic Mississippi cotton planter. That encounter set in motion near-miraculous events involving heroic acts by the planter and his lawyer and Joseph Watson, the mayor of Philadelphia, all determined to return the boys to the city and to freedom. Tapping rich archival sources, Bell overreaches only when he strains to portray criminals like the Johnson gang as a “Reverse Underground Railroad,” drawing oversimplified parallels between people like Harriet Tubman, a “conductor” on that storied network, and murderous thugs like Ebenezer, whom he casts as “a conductor” on its evil twin. His book—more comprehensive than Solomon Northup’s memoir of his own kidnapping, Twelve Years a Slave—needed no such distracting comparisons to deserve wide attention. Ultimately, Bell offers a well-told story of brave, abducted boys—and the equally brave adults who fought for them—slightly undercut by its aggressive casting of Underground Railroad workers and kidnappers of free blacks as mirror images of one another.

A deep dive into the extraordinary risks faced by free blacks in the antebellum era.