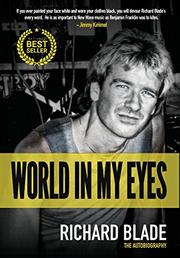 WORLD IN MY EYES

A radio DJ recounts his years as a participant in the new-wave scene in this debut memoir.

Blade—a longtime DJ at the Los Angeles radio station KROQ and a television personality credited with helping to popularize new-wave music in America—seems like one of those people who should already have written a book or two. Not so. Blade has only recently put down in print his stories of coming up during the zenith of rock radio, a time when the tastes and personalities of DJs truly shaped the musical landscape. The author recounts growing up in England in the 1960s and discovering rock ’n’ roll via Radio Luxembourg: “The British government frowned upon this intrusion into its airwaves but could do nothing as suddenly every kid in the UK was listening to 208 and buying the songs they heard on the station.” As a young man, he worked as a club DJ in Europe before relocating to Los Angeles to find himself at the epicenter of the music business, interviewing and mingling with some of the greatest stars of the ’80s. From watching “Rio” debut (and bomb) at the Roxy while standing next to Duran Duran’s Simon Le Bon to having his heart broken by Terri Nunn of Berlin, Blade takes readers back to 1982 in all its sexy, druggy, synthy glory. The author’s prose is simple, but he’s a natural raconteur who never quite shakes off his own awe at the situations in which he found himself: “We were working long hours, under crazy conditions with drugs and guns in plain sight and doing it all for free.” Like all books of this genre, the work drops a parade of names and delivers a good deal of romanticizing, but Blade’s aversion to drugs and alcohol makes him a more reliable reporter than most from that milieu. Fans of his era of music will find much to appreciate in this autobiography, which manages to capture not only the life of the author, but also the experience of a generation (perhaps the last) for which rock was the greatest force in the world.