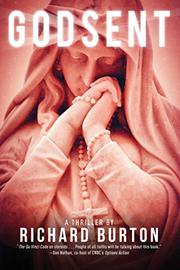 Moving through recent history into the near future, Burton’s debut novel finds Kate Skylar certain that God is real. Proof grows in her belly.

Kate’s pregnant. No one believes her, but she’s never let a man’s seed touch her body. Kate’s the only child of a wealthy South Carolina Catholic couple. The family’s patriarch, “Papa Jim” Osbourne, owns Oz Corporation, “the largest faith-based prison construction and management company in the nation.” A compelled abortion fails. Discovering the pregnancy, Papa Jim, prominent member of The Way, an anti-Vatican II organization, hides Kate in an Italian convent. She gives birth, but she’s told her son, Ethan, is stillborn. Within the church, two insidious forces battle. Using confessional secrets and computers, the Congregation for the Doctrine of the Faith awaits the Antichrist, in the meantime killing male children born to women claiming sinless conception. The Conversatio, a clandestine ancient group, believes a second virgin birth will bring the divine Son of Man into the world. Ethan grows up in Kansas, adopted son of Conversatio agents. His friends are Peter, whom he converts from being a bully, and Maggie, a girl he loves. Ethan’s revealed as the Son of Man amid riots and worship, with the malevolent Grand Inquisitor, the Congregation’s self-aware computer evolved from J.H. Müller’s 1786 difference engine, seeking to find him. Its parallel processing networks leave “the Congregation’s grasp of computer science and programming far in advance of the rest of the world.” Entwined in politics and commanding a private army known as the “munchies,” Papa Jim has its counterpart, AEGIS (Artificially Engineered Global Intelligence System), and he’s intent upon establishing a Catholic theocracy. While Ethan preaches love and forgiveness, the Congregation plans his assassination and a priest/computer scientist ventures deep within the Vatican’s basement to confront a saint in a “noötic field,” only to hear the Grand Inquisitor ask him to receive its confession.