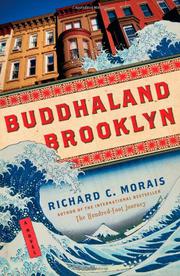 A gentle Buddhist priest from Japan is given the task of building a temple in the Little Calabria section of Brooklyn, and the results are both calamitous and sweet.

Before the move, Reverend Seido Oda had already lived a full and tragic life, having dealt with his father’s mental illness and his brother’s death by fire. He grew up in a remote and rural setting and, at the age of 11, was apprenticed to the monks in the Headwater Sect (a fictional creation of Morais) at a local Buddhist temple. Despite his personal and familial difficulties, for 30 years Oda lives a relatively placid life, until his superior requests that he travel thousands of miles to oversee the building of a new temple in the strange urban landscape of Brooklyn. Once there, Oda comes in contact with a very American form of Buddhism, one in which he’s casually referred to as “Rev” or “the Reverend O.” Oda understandably has difficulty adapting to the exigencies of his new life. He meets Laura, a shellacked blonde, who is into New Age crystals and “channeling the Buddha’s voice during evening prayer.” He also encounters Mr. Dolan, who’s been giving a series of lectures on Buddhism based in part on Buddhism for Dummies. The greatest surprise awaiting Oda is a relationship that he develops with Jennifer, whose casual demeanor belies an engaging intellect (she has a doctorate in Italian and has been translating Boccacio) and a sincere interest in Buddhist texts. They begin a sexual relationship that comes as a surprise more to Oda than to Jennifer. Oda finds he has to balance the delicacy of his feelings for Jennifer with his much more pragmatic connection to Mr. Symes, the hardheaded American businessman who’s a major fundraiser for the temple.

Morais writes with sensitivity and insight about the many ways American life challenges the Reverend Oda’s equanimity.