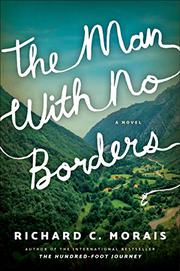 THE MAN WITH NO BORDERS

A powerful man confronts his mortality.

Facing an unexpected diagnosis of terminal brain cancer, Spanish-born, Swiss-based private banker José María Álvarez must race against his dwindling time to settle the “unfinished business” of his thorny financial and personal lives. Born into the fifth generation of a family of bankers in Franco-era Spain, Álvarez has thrived for more than 75 years in a bubble of privilege whose native currencies are wealth and power, expertly honing his skills at deploying both, not least to satisfy his abundant material and emotional appetites. As he battles intense physical pain and lurches between moments of lucidity and vivid hallucinations that take him back to his teenage years—a time when family secrets and family tragedy merged to cast a shadow over the rest of his life—Álvarez also must face the equally shocking contemporary truths he’s concealed from his American wife, Lisa, who’s enjoyed the fruits of his business acumen without fully embracing the trappings of their rarified existence, and their three adult sons, returning from the United States to their parents’ elegant chalet to be present for their father’s final days. Álvarez’s passion for fly-fishing, borne at his domineering father’s side on the salmon-rich rivers of his native northern Spain, provides one of the novel’s dominant motifs as well as the occasion for some lush descriptive prose. Morais (Buddhaland Brooklyn, 2012, etc.) also skillfully draws on his background as a veteran Forbes and Barron’s financial journalist, most notably in the tension-filled account of a high-stakes negotiation that threatens the Álvarez family fortune after a much younger José must assume control upon his father’s premature death. Whether he’s untangling the strands of José’s dark inner world or offering a glimpse of a milieu where money serves as both lubricant and salve, Morais effectively reveals how heartbreakingly inadequate even vast resources can be in providing a bulwark against the assault of life’s most formidable challenges.

A meticulous unearthing of the painful contradictions in a privileged life.