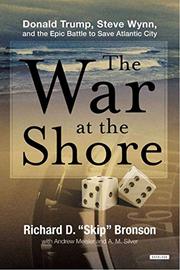 THE WAR AT THE SHORE

Steve Wynn, Donald Trump and the Epic Battle to Save Atlantic City

In the mid- to late-1990s, Atlantic City, N.J., was Donald Trump’s town; as the man behind the Trump Plaza, the Trump Castle and the Trump Taj Mahal, the Donald held a huge stake in the city—one that he wasn’t open to sharing with others. So when world-famous gaming magnate Steve Wynn, whose Mirage Resorts had at one time owned and operated the Golden Nugget Atlantic City, sent right-hand man, and our narrator, “Skip” Bronson to town to begin the process of turning an undeveloped former landfill into a glittering world-class casino and resort, Trump moved into overdrive to stop them. Still smarting from a recent failed attempt to set up shop in Connecticut, Bronson and his team quickly decided that transportation would be key to the casino’s success, so they came up with the idea of the Brigantine Connector—a tunnel that would funnel gamers from the interstate under some of the seedier sections of town and directly to the front door of Wynn’s proposed casino. Trump realized that without the tunnel, Wynn’s project probably wouldn’t take off, so through a mix of lawsuits, outrageous public statements and bombs lobbed via the local press, Trump and his allies tried their best to stop construction. As a firsthand participant in the struggle between these two powerful men, the author presents a full account of the conflict and a detailed behind-the-scenes view of the incredible amount of bureaucratic squabbling, glad-handing and negotiation that goes on before a development of this scale can take place, not to mention the many places such a project can suddenly go flying off the tracks. Bronson, whose writing is clear and warm, packs the story with many anecdotes from his long career as a developer. While the digressions are usually funny, they can occasionally detract from the main narrative, but overall they add to the book’s welcoming, conversational tone.

An engaging insider’s account of the down-and-dirty machinations that go into high-stakes real estate development.