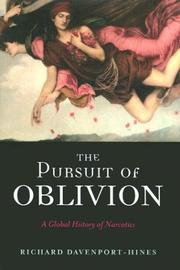 THE PURSUIT OF OBLIVION

A Global History of Narcotics

A British historian trains an eye on the vast history of human experience with illicit drugs.

Beginning roughly in the 18th century, the author relates how opium, cocaine, heroin, cannabis, and many other substances that have bedeviled modern society began their once-innocuous trajectories. Most were first used for healing purposes (“Heroin” was the brand name used by Bayer to market a cure to calm respiratory ailments) or as a means of sedation. Marijuana had medical applications; cocaine was distributed to miners and plantation workers in hot climates to maintain their productivity. As the title implies, what all these substances have in common is their ability to transport the user to a more pleasant state of mind. The author views this human desire for peace, serenity, and “paradise” as a natural impulse and rues the fact that since the early 20th century it has instead been defined as criminal. He points out that prohibition of narcotics arose not from concern for drug use but as a means of criminalizing or marginalizing such specific minorities as youths, blacks, and Asians. Punitive treatment of drug users has not been especially effective, he avers, even though prison sentences for using or supplying drugs remain draconian. Because tough punishments and crackdowns drive up risk and therefore price, they actually end up serving as business incentives for drug suppliers. Davenport-Hines (Gothic, 2000, etc.) offers few specific remedies, although he discusses the example of the Netherlands, where legal, affordable marijuana has reduced dependence on harsher narcotics and addiction-related crime. Making narcotics similar to alcohol in availability by restricting children’s access and closely regulating purchases will ultimately be most helpful to individuals and to society as a whole, he argues. But this is not so much a polemic as a compelling sourcebook whose sheer heft of information, supported by the author’s intelligent take on drug history, grants it the power to persuade.