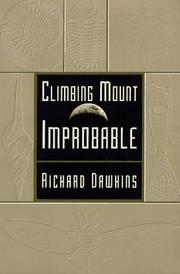 Dawkins (River Out of Eden, 1995, etc.), who now holds a Chair of Public Understanding of Science at Oxford, is at pains in this new work to refute creationists, who have long championed the argument that organs like the human eye could never have arisen "by chance" and that therefore a "Designer" must be at work. The point made early and oft repeated here is that creationists have got it all wrong: Mutations happen by chance (and are usually bad or at most neutral). But natural selection is not random: If the mutation confers an advantage, its possessor has the potential of leaving more offspring, allowing the mutation to spread. The book's title refers to Dawkins's metaphor for evolution: The process is, he suggests, somewhat like the act of climbing a mountain. One doesn't proceed by launching an immediate assault in a straight line from the base to the peak, but by necessarily working through a series of smaller hills first, attaining the summit gradually, in a seemingly roundabout way. Dawkins uses the evolution of eyes, of spider webs, and of wings, among other features, to press his argument, providing wonderfully rich examples from extinct and contemporary species. There are, however, some assumptions that may be questioned by other equally ardent Darwinists: For example, is evolution necessarily "good"? Dawkins seems to think so, and, of course, from a selfish point of view it is, since it produced us. But, as Stephen Jay Gould has recently pointed out, the most successful creatures on earth are bacteria and insects, species that have been around for eons and probably will outlast the rest of us complex critters. A second debatable assumption is that evolution necessarily proceeds toward complexity, when much evidence seems to suggest otherwise. Wonderful metaphorical trees examined in minute detail (including a tour de force on actual fig trees and their pollinating wasps), but Dawkins's evolutionary forest may be just a bit overpopulated with complex and improvable species.