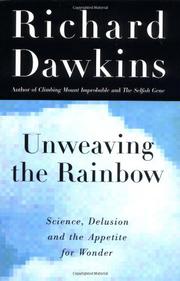 Science, Delusion, and the Appetite for Wonder

Dawkins takes to heart his title of Charles Simonyi Professor of Public Understanding of Science at Oxford in this thoughtful exegesis on the nature of science and why its detractors are all wrong. More with pity than anger, he takes Keats to task for faulting “cold philosophy” for unweaving the rainbow in the long poem “Lamia.” On the contrary, Dawkins observes, Newton’s use of a prism to split white light into the spectrum not only led to our understanding of how rainbows form in raindrops, but enabled astronomers to read the make-up of stars. Dawkins devotes a few chapters to debunking astrology, magic, and clairvoyance, arguing that, as rational adults, we need to be critical about ideas. This notion serves him handily in chapters on coincidence: He explains the exacting calculations of probabilities to show that coincidences aren—t so unusual. Yet people have a penchant for finding patterns where there are none, which leads Dawkins also to address superstitions, the class of errors known as false positives and false negatives, and a wealth of cultural practices from rain dances to human sacrifice. He takes to task what he calls bad poetic science, in which he includes the theories of his rival Stephen Jay Gould in relation to what Gould sees as the three perennial questions in paleontology: Does time have a directional arrow? Do internal or external forces drive evolution? And does evolution occur gradually or in jumps? The spleen’s so heavy here that one can anticipate a debate, if not a duel. Final chapters provide him with a platform for reweaving the rainbow, enlarging on his earlier themes and metaphors in relation to memes, genes, and evolution. The speculative writing here is less rooted in complex gene analysis than in philosophy of the Dennett school. A sharp mind is much in evidence, delighting in exposing fraud, providing instruction, baiting a colleague, and indulging in his own high-wire acts of evolutionary dreaming.