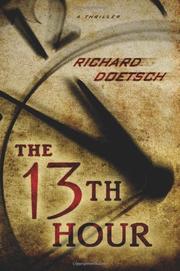 A mysterious gift offers Nick Quinn a second chance to save his beloved wife.

He’s been arrested for Julia’s murder, and the cops seem to have a solid case against him. His fingerprints are all over the murder weapon; he has traces of powder on his hand; and his wife mentioned him in a possibly incriminating way during a 911 call just before she was shot and killed. Just when things seem hopeless, a stranger appears in the police interrogation room with a strange present: a watch that will allow Nick to relive the previous 12 hours in reverse, one hour at a time, giving him the chance to alter the course of events that led to Julia’s murder, thus changing her fate—and his. The conceit behind this book is an interesting one. At first it seems as if it would be easy to prevent a murder with foreknowledge and a time-traveling watch, but as Nick discovers, events tend to happen for a number of reasons, and it isn’t easy to isolate the one link in a chain of events that could be removed to prevent the future. Practical concerns about time travel are inescapably raised but never adequately addressed, suggesting holes in the author’s overriding cosmology, and Doetsch (The Thieves of Faith, 2008, etc.) falls victim to an occasional fit of purple prose. Still, these minor flaws do not really detract from a taut, if otherwise standard plot that is all the more compelling because we know how everything ends—at least in one version of events. Nick is a rather flat character, but the villain is satisfyingly frightening.

Time travel puts a welcome spin on this stock thriller.