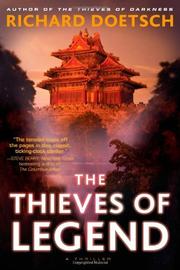 THE THIEVES OF LEGEND

In Doetsch's fourth Thieves thriller (The Thieves of Darkness, 2010, etc.), world-class thieves Michael St. Pierre and his girlfriend KC Ryan—both of whom can scale the steepest heights and crack the stiffest security codes—find themselves in parallel peril in different parts of China.

Unless Michael, under duress in Macau, recovers an ancient diary containing deadly secrets, KC will be killed. Unless KC, controlled by a cold female assassin in the Forbidden City, recovers a special compass tied to the diary, it's curtains for her partner. And unless Michael and KC succeed, a superpotent toxin will threaten the entire free world. Michael's blackmailer, U.S. Army Col. Isaac Lucas, is so desperate to recover the diary and compass, he condones coldblooded killings. Lucas' chief opponent is the ruthless Chinese underworld leader, Xiao—who turns out to be his brother, Jacob. When they were kids, their Chinese mother fled to her homeland with Jacob to escape their violent American father, who was obsessed with translating a Chinese document he acquired while stationed with the military in Hong Kong. Still torn by the murder of his mother for the diary, Xiao wants vengeance in a big way. Swords separate heads from torsos, identities are switched, KC is poisoned, the storied past of warships, palaces and Madama Butterfly intrudes upon the present. Whether abused, neglected or abandoned as children, most of the characters in this sprawling, action-filled book have much to overcome.

Doetsch's series is running out of fresh ideas and exotic settings, but those who aren't overly familiar with his formula or bored with the bland Michael St. Pierre will find this book reasonably diverting.