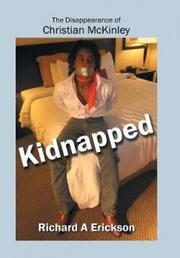 The Disappearance of Christian McKinley

by Richard A. Erickson

A tense kidnapping thriller that takes a deep dive into the murky waters of criminal psychology.

When Johnny and Craig meet, it’s a match made in hell. They meet as cellmates in prison after lengthy downward spirals into addiction, theft, and other petty crime. Both have histories of abuse, although Johnny has taken on the role of abuser, with Craig as his victim. When they get out of prison, they look for a way to make money and vent their rage, and their plans take a dark turn almost immediately. Concocting a scheme to kidnap Christian McKinley, the adopted grandson of one of Minnesota’s most wealthy citizens, is one thing. But when the two actually snatch Christian from a downtown Minneapolis Hilton and demand a $17 million ransom, the cracks in the ex-cons’ volatile relationship begin to show. And although the two had each pledged to be better fathers than their own were, taking care of an actual young man—one with the power and privilege that they were always denied—brings up more issues than they expected. Their mistrust and anger can only lead to a violent conclusion. Debut author Erickson’s prose is solid, offering several twists and using omniscient third-person narration to its fullest extent to provide insight into the characters—even those who don’t understand themselves. His depictions of the various players are emotionally razor-sharp, and he maintains a consistent narrative voice throughout. That said, his descriptions of psychological stresses can sometimes feel overly clinical, especially toward the beginning of the book: “The psychological damage manifested itself in Craig’s behavior as an adolescent and later as an adult, yet people around him could not read the messages his body was sending. His own messages even confused him and intensified his already fragile self-esteem.” This choice may alienate some readers, but those who like psychological profiling in their crime fiction will enjoy its depth.

Erickson enhances a familiar formula with a keen understanding of his characters and a series of plot turns.