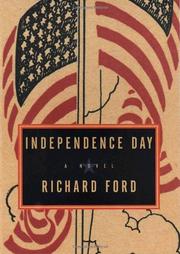 Ford follows his much-celebrated The Sportswriter (1986), picking up the story about six years later, as Frank Bascombe, now in his 40s, emerges from the midlife crisis depicted in the earlier book. No longer a writer of any kind, Frank sells real estate in Haddam, New Jersey, during the boom period of the '80s. His promise as a fiction writerstill dwelled upon at lengthcan be the only explanation for his compulsive introspection as a realtor, a job he endows with all sorts of metaphysical qualities. Also a landlord and local entrepreneur, Bascombe is proof that the overexamined life may not be worth living. (He can't do anything without chewing it over first in Ford's typically turgid prose.) But Bascombe's suburban existentialism is more pathological than philosophic, an excuse for his failures as father, husband, and lover. But he is quite convinced of his moral and intellectual superiority: He scorns the local country-club Republicans, considers himself a small-scale social engineer of higher purpose, and finds solace in the wisdom of Emerson. Ford punctuates the slow-moving non-events of this overly long narrative with bland recitations of historical bites, valiantly trying to invest this fiction with profound social overtones. In reality, though, for all his "oracular" abilities, Frank is mute when it comes to "the intricate language of Love." He nearly blows a fine, post-bimbo relationship with a smart, sultry widow; and his ironic banter with his troubled son, who lives with his remarried mother, seems to hasten the odd teen's decline. Bascombe is part angry white male, and part new sensitive guy, but mostly just a smug fool, who lingers over every detail of his life with Harold Brodkey-style obsession. Humorless and full of sham insight ("We're all free agents"), though fans of the first installment will not be disappointed.