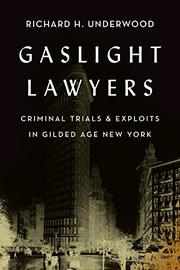 In the last third of the 1800s, Manhattan was a hotbed of crime, and its courts were often hamstrung by a toxic combination of unscrupulous law enforcement personnel and crude investigative techniques. In this book, Underwood (Law/Univ. of Kentucky; Crimesong, 2016) furnishes a series of journalistically rendered vignettes meant to capture the essence of that legal milieu. Much of the work is devoted to larger-than-life legal figures: William “Big Bill” Howe, for instance, was a cinematically dramatic defense lawyer known for his courtroom histrionics; he kept reporters on the payroll to advertise his triumphs and was among the first to rely upon a client’s claim of insanity as a defense. William Travers Jerome, known as “The Reformer,” was a prosecutor who made his reputation sending corrupt attorneys to jail. But he was no angel; he once used an affidavit in a case from a crooked lawyer he’d once prosecuted for suborning perjured affidavits. Over the course of two chapters, the author follows the case of Ameer Ben Ali, nicknamed “Frenchy,” who was tried and convicted for the murder of a woman in 1891. The prosecution was particularly devious and suggested that Ali might also be London’s Jack the Ripper, but he was eventually pardoned. Underwood is a masterful researcher, and he combs diligently through newspapers and trial transcripts to reconstruct these historical snapshots. He meticulously describes a judicial cosmos that’s largely unfamiliar now—one without Miranda warnings or scientifically sophisticated forensic tools. Trials instead relied heavily on eyewitness testimony and lawyerly skill, which generated unequal outcomes: “Because crime science was in its infancy, the guilty actually had a shot at acquittal with the right lawyer; but the innocent were often at the mercy of unscrupulous prosecutors, corrupt police, and hanging judges.”

An accessible, marvelously rigorous account of a bygone legal era.