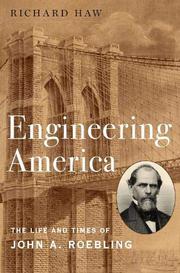 The Life and Times of John A. Roebling

A hefty biography of John A. Roebling (1806-1869), renowned for designing and constructing suspension bridges and other engineering marvels.

Haw builds on his previous research on the Brooklyn Bridge to create this dense, prodigiously researched portrait of Roebling, who designed numerous projects but is perhaps best known for his initial plans for the construction of the Brooklyn Bridge before his death. Roebling grew up in Germany and came to the U.S. in 1831, leading fellow German settlers to unclaimed land in rural Western Pennsylvania, where they tried to establish a self-sufficient town despite unfavorable soil and bad weather. Butler County became a base of operations for Roebling, his growing family, and later immigrants from Germany. In this mostly chronological narrative, Haw establishes early on that Roebling exhibited visionary tendencies across a wide range of disciplines. As the author notes, “he was fundamentally a seeker and a believer….So much of John’s life had been spent reaching toward a goal that was just out of reach, be it another shore or a new way to build or to organize society or the afterlife.” Haw also explains that some of those visions could be considered crackpot, aggravated by Roebling’s sometimes cruel and even violent behavior. As the countless details of Roebling’s life unfold, some readers are likely to tire of his unpleasant personality. Fortunately, those elements arrive in relatively short bursts, and Haw devotes lengthy sections to the art and science of suspension bridge building, not only by Roebling, but also by his engineering rivals. The “times” of Roebling’s life, as depicted by the author, are often more interesting than the life itself. For example, Haw explores how the fates of developing cities rose and fell depending on Roebling’s bridge-building successes and failures. The bridges even played a role in the Underground Railroad, and for a few compelling pages, Harriet Tubman appears in the narrative, which is grounded in massive research that may be overwhelming for general readers.

A sturdy scholarly biography that will appeal most to Roebling devotees and civil engineering buffs.