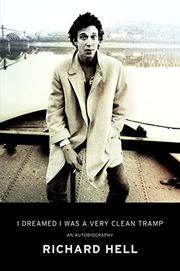 I DREAMED I WAS A VERY CLEAN TRAMP

The life and wild times of a punk avatar.

Besides being a rock legend, Hell has long been a journalist and novelist (Godlike, 2005, etc.), and this memoir reveals a skilled writer. Born in Kentucky in 1949 as Richard Meyers, he became a fledgling poet who ditched home and high school for the New York art world, where he trawled through galleries and beds, winding up as the boy toy of the wife of sculptor Claes Oldenburg. He also co-founded the band Television with his contentious pal Tom Verlaine, although he left before the band’s first album, as would also be the case with his brief stint with Johnny Thunders and the Heartbreakers. He hit his peak instead with his own band, The Voidoids, creating both a classic album (“Blank Generation”) and a fashion style he wore on his torn and safety-pinned sleeve. The Brits noticed. Punk was born. In recalling these days when love came in spurts, Hell is precise, telling a lot without ever seeming to tell too much. He nails the essence of both scenes and people, from rock peers to exploitative record producers. Nodding on heroin “was like the dream of a dream, a dream you could manipulate—in other words, paradise on earth.” Sid Vicious “wasn’t really vicious,” just someone who “saw that there was a crazy opening into fame and money that required only that he relax into full loutish negativity.” He can also be bitter, as when he writes that Thunders’ lyrics “were half-assed in never having an original idea or turn of phrase.”

A deft, lyrical chronicle by a punk with perspective.