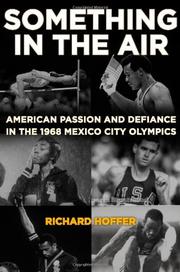 SOMETHING IN THE AIR

Even if the event hadn’t taken place during one of the most turbulent and revolutionary decades of the 20th century, the Mexico City Summer Games would have stood out as unique among the Olympics. Never before had a third-world country hosted the event, and never before had they been held at such great altitude—more than 7,000 feet above sea level. Many athletes who excelled in ordinary climates were slowed by the effects of the altitude, but the unusual conditions gave some quirky competitors—such as high jumper Dick Fosbury, inventor of the Fosbury flop, or thug turned boxing champion George Foreman—an edge over their more conventional rivals. Of course, Mexico City will be remembered mainly for the iconic image of American runners Tommie Smith and John Carlos on the medals stand, heads lowered and black-gloved fists raised in the black-power salute. Hoffer lays out the circumstances that led to that brief explosion of overt politics, as well as the consequences, least of which was the runners’ purely symbolic banishment from Mexico City. The author introduces some of the characters behind the scenes, including International Olympic Committee Chairman Avery Brundage, whose sympathy for apartheid-era South Africa made him suspect to black athletes worldwide; Bud Winter, the track coach at San Jose State University whose eccentric training methods centered around Zen-like relaxation, but whose interest in his athletes’ well-being often ended at the stadium gate; and Harry Edwards, a runner at SJSU turned political activist and professor who tried to organize a boycott of the Olympics by black athletes. Hoffer’s choice to focus mostly on Americans simplifies the narrative considerably, though including stories unrelated to racial politics may have dulled the story’s overall impact.

A good introduction to a watershed sports event that often reads like a book-length SI article—breezy, entertaining and not too deep.