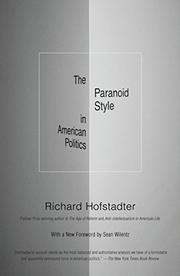 THE PARANOID STYLE IN AMERICAN POLITICS

Professor Hofstadter's last work, Anti-intellectualism in American Life. received the Pulitzer Prize and a few other choice awards. It was one of the bright events of 1963, though not everyone was completely happy with Hofstadter's definition (anti-intellectualism was viewed as a "resentment and suspicion of the life of the mind and of those who are considered to represent it; and a disposition constantly to minimize the value of that life"), while others felt he abused the "Puritan" or "conventional folk wisdom" ethos. Naturally, these disparaging remarks came almost wholly from the conservative camps, who now will let out louder howls once Hofstadter's collection of essays here, primarily concerned with the Radical Right, reaches them. However, in general, the value of these essays is markedly limited. Frankly, there has been a glut of books, magazine articles and TV documentaries devoted to the business of McCarthyism in the '50's and Goldwaterism in the '60's. Hofstadter adds little that is new (indeed most of his papers in this collection are already well known), and his penchant for terminology like "paranoid style" and "status politics" are merely fancy ways of saying what people like the Birchers believe: a socialist conspiracy is afoot in Washington and Communist military might is subverting the world, etc., etc. Of course, Hofstadter puts all of this in socio-historical perspective, with some psychological trimmings to boot, and since he is both a scholar and an interesting writer, no one can lose by reading him. The concluding three essays are more obscure and particularized: the Anti-trust Movement, Manifest Destiny and Imperialism, and the Free Silver intrigue. A respectable gathering.