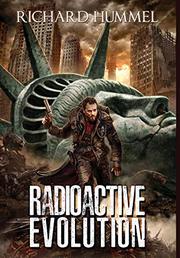 Debut author Hummel launches a sci-fi/fantasy series with the story of a young man in a post-apocalyptic America who bonds with a dragon.

Twenty-something Jared Cartwright is on his own in a far-future New York City that’s been ravaged by past nuclear wars. To avoid death by radiation, all humans, including Jared, must periodically inject themselves with microscopic nanites. One day, while searching for supplies, Jared finds a strange rock that generates electricity and visibly agitates the nanites in his injector. Out of curiosity, he injects these nanites into the rock, which turns out to be an egg. A fire dragon hatches; she goes by the name “Scarlet” and communicates with Jared telepathically. Because of their bond, Jared makes a formal vow to Scarlet’s dragon-queen mother to guard and protect her daughter. Fortunately, he also develops newfound abilities—for every hostile, mutated creature he kills, he earns nanites to bolster skills, such as “Heat Sight” and “Maximum Muscle.” Jared furthermore makes it his mission to aid Scarlet in her quest to help dragons re-emerge—as they’ve been hiding from humans underground for millennia. Along the way, Jared and Scarlet face numerous antagonists, including mutated monsters and other human survivors. Hummel’s tale is rife with elements of the LitRPG genre, which offers a fusion of sci-fi/fantasy literature and role-playing games. At the same time, the author also creates intriguing characters and an engaging fictional world. Although the narrative provides little backstory for Jared prior to his parents’ deaths, it meticulously establishes his and Scarlet’s camaraderie; this is helped by the fact that each character typically knows that the other is in trouble almost instantly. There’s also a potpourri of mutated beings, including a group of enslaved humans and some beasts whose mutations seem suspicious. Despite the fact that the story offers abundant exposition (via telepathic conversations), Hummel sets a firm pace that puts the heroes into frequent battles and confrontations with other perils.

A worthy series kickoff with riveting characters and a world that readers will want to explore.