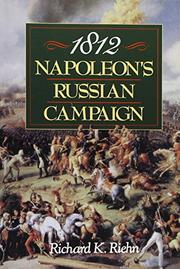 A masterful and mildly revisionist assessment of Napoleon's disastrous attempt to make Russia a part of his empire. Drawing on archival sources newly translated from the French and German as well as standard references (including Clausewitz), military historian Riehn offers a richly detailed account of a great captain's comeuppance. Setting the stage with background on the martial arts in Europe during the early 19th century, as well as with big-picture perspectives on the continent's geopolitical alignments, he provides a coherent explanation of the objectives that induced Napoleon to invade Russia in mid-1812. At no small cost, the emperor marched his Grand Army across trackless wastes to Moscow, the motherland's spiritual hub, only to find it evacuated and ablaze. With his flanks vulnerable and forces depleted, Napoleon belatedly turned for home. He made it back to Paris, but most of his multinational legions perished on The Steppes. Napoleon himself attributed his defeat to ""General Winter,"" a verdict widely accepted by contemporaries and posterity. As Riehn makes clear, however, the bitter cold and snow came late that year, i.e., during the latter stages of the retreat. Miscalculations and errors, he argues, were the real causes of the campaign's failure. To begin with, Napoleon expected to win a set-piece battle early on and then negotiate an advantageous treaty with Tsar Alexander. Instead, he was obliged to tramp through backwaters that could not support his troops or horses in vain pursuit of a foe who would not stand and fight. Beset by logistical woes largely of his own making, moreover, Napoleon exhibited unwonted hesitancy in making command decisions at critical junctures. As a practical matter, Riehn concludes, the Corsican usurper was not prepared to sustain the kind of plodding offensive required to conquer Russia. While he did show flashes of his former brilliance, the calamitous outcome proved as inevitable as that of any classic tragedy where hubris plays a leading role. Military history of a very high order. The text has helpful maps, line drawings that illustrate tactical formations, a glossary, and a wealth of appendices enumerating the manpower of participating commands.