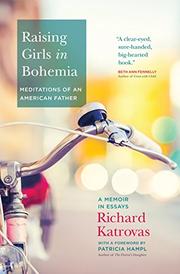 Meditations of an American Father: A Memoir in Essays

A distinguished writer and English professor chronicles his experiences living and loving between American and Czech cultures.

When Katrovas (Scorpio Rising: Selected Poems, 2011, etc.) went to Czechoslovakia in 1989, he had no idea that from that moment forward, he would become a divided man. Married, he began an affair with a Czech woman and eventually wed her. In the end, he would stay with his second wife “only because [he] had children with her.” Yet his love for their three daughters was and remains “fierce and direct.” Their births gave him insight into his own odd childhood, during which he lived first on the run or on welfare with parents and then abroad in Japan with his uncle’s family. Like their father, the girls lived a life of in-between, though it was much more privileged than his own economically disadvantaged one. As they grew up and he grew into his role of father, his attitudes toward women changed. Females and female sexuality were no longer just the source of “sweet and earthly succor.” A barely functional speaker of Czech, Katrovas admits himself to be a “grudging observer” of the Czech society, in part due to the fact that its language and culture loom as ever present threats to intimacy with his daughters. At the same time, Czech society has allowed him to understand his past as well as his own culture from a unique perspective. Females in Prague, for example, can walk the streets at night in safety; yet in the American land of liberty, they cannot. It is only in the realm of rhetoric that women can express some measure of freedom. At times brutally provocative, Katrovas’ essays, which also grapple more generally with otherness, faith and the role of art in society, are nothing if not stimulating.