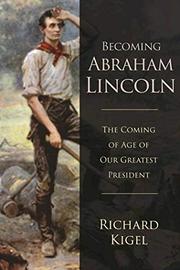 The Coming of Age of Our Greatest President

An intimate biography of young Abraham Lincoln from primary sources—i.e., those who knew him in his formative years.

Lincoln’s Illinois law partner, William Herndon, nine years his junior, was the primary and initial biographer of Lincoln after his death, and while thorough, he was guilty of “myth-making.” In this touching work geared toward students, New York City teacher Kigel (Heav'nly Tidings from the Afric Muse: The Grace and Genius of Phillis Wheatley, 2017, etc.) presents the life of the legendary president up to 25, when he first got elected to the Illinois Assembly. The narrative is comprised exclusively of voices who knew the early Lincoln, such as family and acquaintances in his years in Kentucky, Indiana, and Illinois. What emerges from these folksy recollections is a portrait of a young man forged in the harsh reality of frontier life in a family that moved frequently, living in basic log cabins and tending to hardscrabble farms, and where hard labor and little education were the way of life. Moreover, Lincoln was marked early on by the deaths of his newborn baby brother, his mother (when he was 9), and his only sister, who died having her first baby. While known for his height and physical prowess, the young Lincoln was also enamored by books available to the mostly illiterate folks on the frontier, specifically the Bible, Pilgrim’s Progress, Aesop’s Fables, and Robinson Crusoe. His father was insistent his son get “a real eddication.” Lincoln relied on books as his teachers, and he fashioned himself into an inventive storyteller and great entertainer. He also garnered a reputation as a scrupulously honest man, a reputation begun in his early jobs as a ferryman and store clerk. An early trip to New Orleans by steamboat exposed him to the horrors of the slave trade.

Kigel’s emphasis on primary sources is refreshing, and he fashions an instructive work that will be especially useful for younger readers.